Clinton the Owner / Manager and his lovely wife Charlie. 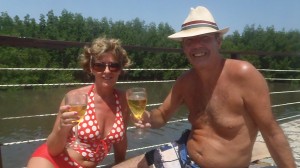 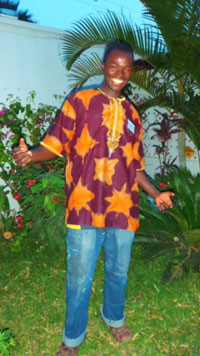 Saiku was Born in Batabut. He is42 years of age and is the longest serving member of the Kingfisher Team. He is married to Fatou and has three children; Jennifer, Sally and Mariama.

He creates fantastic traditional items in wool as well as other materials. 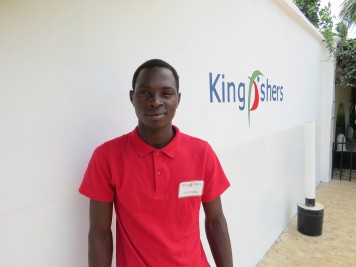 Amadou is the Kingfishers  Team Supervisor.

He is 28 years of age and   was born in Nema Fulla,   way up country in deepest  darkest Gambia.   He is single, has a lovely smile and a wicked sense of humour. A big, big Barcelona fan with his favourite player of course being Lionel Messi. Amadou loves singing and dancing, next time you are at Kingfishers, ask to see his Michael Jackson ” Moves ” He also excels at card tricks, getting through to the final of “Gambia’s Got Talent ” competition 2020. 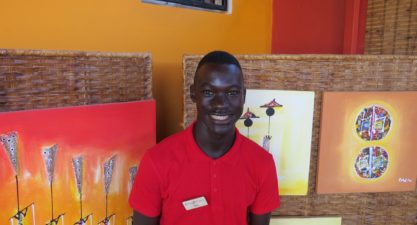 Tom is 23 years of age and was born locally in Sukuta where he still lives now. Tom is in his third season now with Kingfishers. Like Amadou he also has a radiant, cheeky grin and this is seen often due to his keen sense of humour.

Has recently completed an IT course regarding web design which is ultimately what he wants to do, earn own and manage his own web site design company. Tom has produced a Kingfishers promo video which can be seen on our Facebook page

He is an avid Manchester Utd fan although has been extremely frustrated with his team’s recent performances !!

Don’t ask him to sing, he will make your ears bleed !